The Big Question:
Is it cheaper to operate my vehicle using a device that adds Hydrogen and Oxygen gas from water into my cars engine than from only using gasoline?

Success Criteria:
If I invest less money to power my car covering the same roads, at the same times, under the same conditions with the kit installed than without, then the answer to the Big Question is Yes.

The Controversy:
After visiting many websites (both for and against) this technology, Ive determined that there is such a mix up of what each side is arguing that no rationale debate can even be had. For example, technically speaking, water isnt powering the car. It is the Hydrogen and Oxygen gas molecules from the water that provides the additional source of combustion fuel. So when proponents say, Water is fueling the car, the chemists have a cow and immediately say everyone is full of shit. But what makes the chemists have a herd of cows is when they read (or hear) that the manufacturers of these devices say that they produce HHO. Talk about shitting a brick. If one reads the websites carefully of the manufactures (at least the one I read very carefully), it is stated that HHO is shorthand for what is being produced (Hydrogen gas and Oxygen gas) and not the actual compound being created. Silly chemists. Lastly, the BIG issue surrounds how much energy it takes to actually convert water into the Hydrogen and Oxygen gasses. I followed a few mathematical calculations, and they seemed to indicate that the energy output doesnt warrant usage of these systems.

Why do this?
Ive made it a point to not argue about something that can be proved or disproved fairly easily in a complex system. Seemingly rationale arguments and equations just dont always follow what happens in the real world.

So, rather than get involved in all the hoopla, Ive established my criteria for success: If it costs me less to operate my vehicle (all costs in, baking soda, distilled water, etc. etc.) with the device than without, then systems like the Magdrive HHO generators are worth investing in.

Concerns:
Regardless of the outcome, whomever ends up on the loosing side will say I did something wrong. If the device doesnt provide the benefit I expect, the manufacturers will say I screwed up the installation. If the device does provide the benefit I expect, the chemists will say that some other condition (like my loosing 3 lbs) caused the improved financial benefit Im experiencing. What I can assure you is that the test is the test is the test, and the results I share are the real deal. Whatever Im sharing with you is what Im really seeing.


Bias:
To make this as transparent as possible, you should be aware that:
1) I really want this to work.
2) I think chemists are overrated, egotistical, physicist wanna bes who just couldnt cut the mustard of a physics program.
3) I dont believe this will work.

You are welcome to reuse the information found here for any purpose as long as you provide a link back to this site on the same page where you present the information. 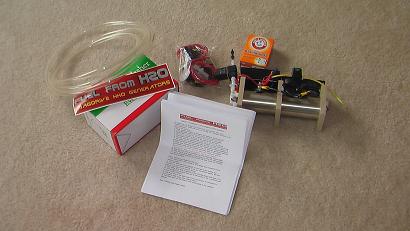 (03JUL07)Like a kid at Christmas, I tore through the box. The main device, the MagDrive, looks pretty cool! It isnt a polished construction piece as it was clearly assembled by hand. The geek inside me is totally turned on by this! In case I've implied otherwise, the MagDrive seems very sturdy. It has rubber grommets in the right places, heavy gauge wire, tight tube fittings, etc. etc.

(15DEC07)After months of running this device, I can say conclusively that my particular set up didnt work. So, the verdict is FAIL! Im disappointed to say the least. What I found was that my actual mileage actually suffered a bit. Some folks I talked to indicated that it could be related to the computer in the car trying to make adjustments, but according to the manufacturer of the device, this shouldnt be an issue for my particular car. No cheaper fuel source for me. Hopefully others can make such a system work.